How to decide what previewing configuration for Adobe InDesign files (.indd) in MediaBeacon is the best choice for your implementation.

MediaBeacon can preview Adobe InDesign files (.indd) in several ways. This article is intended to explain and document correct configuration steps and pros and cons for three scenarios: Full Scan of InDesign Native Previews, MediaBeacon Using InDesign as a Previewer, and MediaBeacon-Generated Previews.

MediaBeacon is able to use the preview images that are saved within each .indd file without the installation of any Adobe software, fonts, or font management system. In this case, previews are generated by the last user to save an .indd document.

This is our Best Practice recommendation.

Make a preference change to InDesign to force save higher-quality previews.

With this method, files must be saved correctly as well. When saving files in InDesign, ensure that in the Save or Save As dialog, the "Always Save Preview Images with Documents" checkbox is checked.

MediaBeacon can use InDesign as an external previewing application to create previews. InDesign must be installed, licensed, and configured on all the servers that might handle InDesign document preview requests.

On the MB server 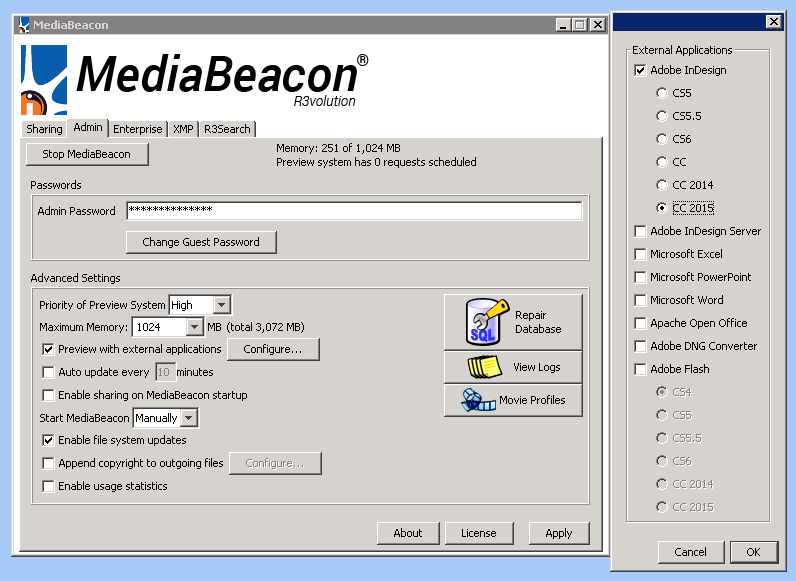 If neither of the above settings are used, MediaBeacon will attempt to extract previews from .indd files if possible. These will likely be low res, and limited to the first page of an .indd file, depending upon the settings used to save an individual file.